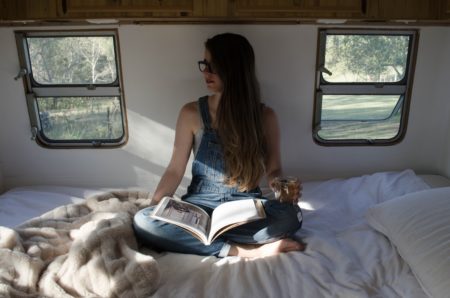 Tiffany is devastated that her father passed away, and to one degree or another, she’s also surprised at this reality.  It isn’t that she didn’t think she’d be sad — she knew that when he was gone she would feel empty.  But she has been unprepared for the additional and complicating layer of emotional pain at how much was left unsaid between the two of them.  Tiffany’s father had never been able to accept the core of who she was.  She “knows” in her head that he loved her, but she can’t escape the fact that their unreconciled differences seem to cast doubt.  Tiffany cannot be consoled and has had to take time off work because she cannot concentrate.  Just yesterday she started crying out of the blue in the checkout line at the grocery store.  All she can think about is how much she wanted to say but never had a chance.  Tiffany is worried that she will never be able to escape this overwhelming grief.

Dan has felt numb since his wife died. They had been married for 35 years and had three wonderful children. At the funeral, Dan appeared rather “emotionless,” if the commentary from his best friend (who is trying to help) is any indication. All his children were crying, but he just stood and stared into space. He can’t eat or sleep, and keeps talking about his wife. His children are trying to help too, but nothing seems to work, and it is making their own grief process a lot more complicated. Dan mentioned to that there is no purpose to life without his wife.

Eric and Vanessa were together for 20 years, but for the last several, Vanessa had become increasingly distant.  Eric barely noticed at first, and assumed it was related to her recent promotion to VP at her job, a large marketing firm downtown.  But after a fatal text message mishap, he discovered Vanessa had been cheating on him with her assistant for at least 18 months.  Now, some 14-months later, he is struggling to move on.  A friend who lost her partner the year before suggested that he seemed to be experiencing a grief process, which seemed to make sense to him.  Even though he hadn’t experienced the physical death of his partner, their relationship very much died.

Individuals may assume the grief and bereavement are the same thing, and in fact, they are similar.  One way to explain the relationship between these terms and the concepts they surround is to say that grief could be seen as an process-oriented emotional reaction to death, and bereavement is our actual choice/action of working through an individuals’ death. When someone we know dies, we enter a period of bereavement that contains a multitude of emotions. This period of bereavement, and the emotions that go along with it, is different for everyone.

“After my uncle died, my bereavement contained a lot of things that are typically experienced in the process of grief, but I also experienced some things that I’ve never seen anyone actually write about.”

As a subset of grief, it may help to understand that an individual can enter acute grief, which is a short period of intense emotions after the death of a loved one. Acute grief lasts for less than six months, and does not interfere with an individuals’ daily functioning. On the other hand, complicated grief lasts longer than six months and impairs an individuals’ daily functioning.  Grief often becomes complicated when some additional factors impede a more straight-forward process — things like unresolved differences, unexpected or traumatic death, pre-existing mental health issues in the person grieving, etc. 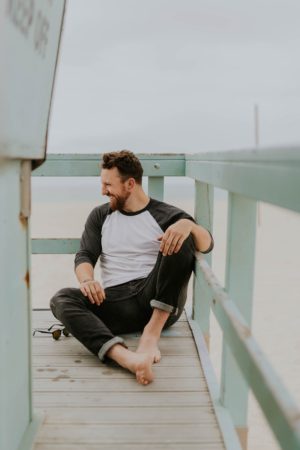 While it is important to say that everyone’s grief processes are going to vary, it is equally important to acknowledge the ways that our grief processes may have commonalities. Grief is usually associated with sadness and numbness, but can also produce feelings of relief, happiness, or anger.   The precise emotional content is of course impacted greatly by one’s relationship to the deceased.  During certain periods of the bereavement process, emotions may seem uncomfortable and/or even unsafe.  This discomfort can last for short or extended periods of time, and depends on the individuals’ grief stage.

How Long Does Grief Last?

Also, it’s worth noting that even healthy, straight-forward grief processes plain and simply hurt like hell.  There really is no way around that.  Further, even when we’ve healed, the grief process may irrevocably change us and leave us feeling that things, and even we ourselves, are no longer the same.  And indeed, when we lose an important relationship or person (etc.), we aren’t the same any more.  Learning to find the new you, impacted by grief but not defeated, is the goal.

The Stages of Grief 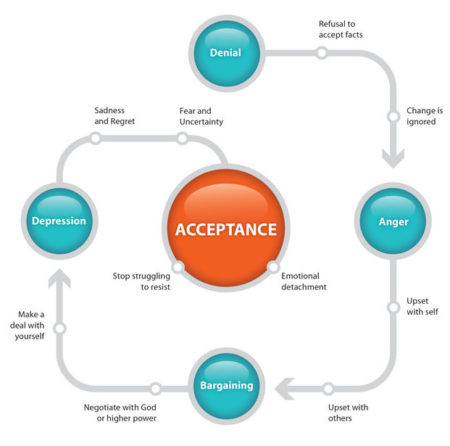 Elisabeth Kubler-Ross determined that our grief processes have a number of things in common, which she developed the five stages of grief.  To explain them briefly:

Our therapists aren’t just expert counselors – they’re agents of change!  They can help you move through the stages of grief and even give guidance when you get stuck.  We can help you build new and lasting support systems, cope with unresolved issues, and get you on the road to  healthy, vibrant living!